The Joint Admissions and Matriculation Board (JAMB) has blamed the teething problems faced by candidates registering for the Unified Tertiary Matriculation Examination (UTME) on panic and pressure occasioned by time specified for the exercise. Besides, the Board said it has learnt its lessons from the recent postponement of the mock examination intended to test run its system and level of preparedness.
JAMB spokesman, Dr Fabian Benjamin who spoke with The Guardian on recent developments admitted that there was actually a breach of some of the equipment which, if allowed to continue, would have compromised the integrity of the exercise. 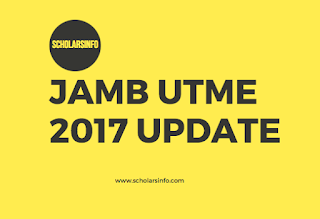 Benjamin who faulted claims that the Board was not prepared for the examinations said the challenges being experienced are teething problems which have been addressed. He said, “Thank God the mock examination is a voluntary exercise that was designed to test -run our system, to also identify some of those things that we have identified now. Some of the things we learnt from that postponement, we will not begin to discuss them in the open because they are very confidential, but suffice it to say that it opened the door for us to see what we should do to ensure that the forthcoming examination is one of the best ever conducted by this Board.
Although the Computer Based Test (CBT) has been in use by the Board in the last three years, Benjamin clarified that new innovations are designed every year to checkmate any act of security breach.


Ads: Download JAMB CBT Past Questions And Answers App for Android
Text your name and email for activation keys ➡ 09034039101

Ads: Download WAEC CBT Past Questions And Answers App for Android
Text your name and email for activation keys ➡ 09034039101

According to him, “CBT as an exam mode is the same, whatever technology, whatever information or innovation we are bringing to bear on the exam, we are still going to deploy CBT. But the process is what we are talking about. Each year, we keep changing and improving on the processes.
First, in the area of questions, we have come up with a lot of innovations such that we have enough items to examine the candidates on. Previously, we used to deploy once in a day, a place that has three sessions in a day once you deployed in the morning, it is used for the whole day, but this is no longer the case. The Registrar, Prof Ishaq Oloyede is insisting that we must deploy each time we are conducting examination, which means that if we have three sessions, we will deploy three times; this is a new innovation to ensure that even the person at the centre does not compromise the sanctity of the examination.

He appealed to Nigerians to give the Board a chance in its efforts at redefining the process while assuring that the results would come out better in the long run.
So far, Benjamin said about 1.3 million candidates have registered for the examination billed to hold between May 13 and 20.
on April 20, 2017