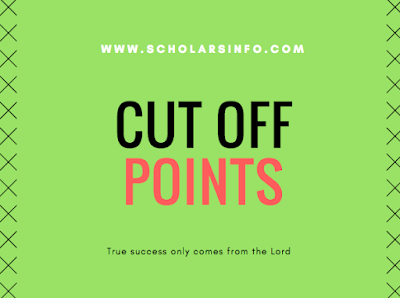 What is the JAMB cut off mark for Oduduwa University Cut Off?


Well, to help the candidates with such problem, we have decided to reveal the Oduduwa University 2017 so that anyone who does not meet up with the specified cut off point will make hay while the sun shines.


Judging from our experience last year during the 2016/2017 academic session admission, we found out that some candidates who purchased Oduduwa University post UTME where screened out on the exam day because their jamb results was not up-to the required mark.


The cut off point for Oduduwa University for 2017/2018 academic session is at least JAMB score of 120. Hence, it is important that candidates who chose Oduduwa University as their choice of institution but scored less than 120 should not buy the admission form but rather inquire if there is any course that is suitable for your JAMB score before making payment for the 2017 admission form.

Note: Post UTME cut off point for Oduduwa University varies from one course to the other. The cut of mark for the different courses will be made known by the institution in due time.

For candidates with less than 110;
If you intend to run for pre-degree programme, quit buying the admission form at the moment as there is really no room for JAMB score less than 110 but proceed to obtain the pre-degree form directly from the school.


For those who scored 120 and above in their JAMB UTME result, you have to be on alert as the sale of the Oduduwa University’s sales of admission form will commence soonest.


What is the cut of point for Oduduwa University?

JAMB is yet to update us with any new changes with Oduduwa University cut off mark for 2017/2018 academic session. Stay tuned!


Put your email and phone numbers in the comment box below to receive any new changes and updates on Oduduwa University Cut Off Mark as well as admission details.

This page will be constantly updated in case there is any change in the cut off point.


Wishing you good luck in your quest for admission this year.
on September 06, 2017